Curbed NY – In Nolita garden fight, some see a housing opportunity; others see a false choice 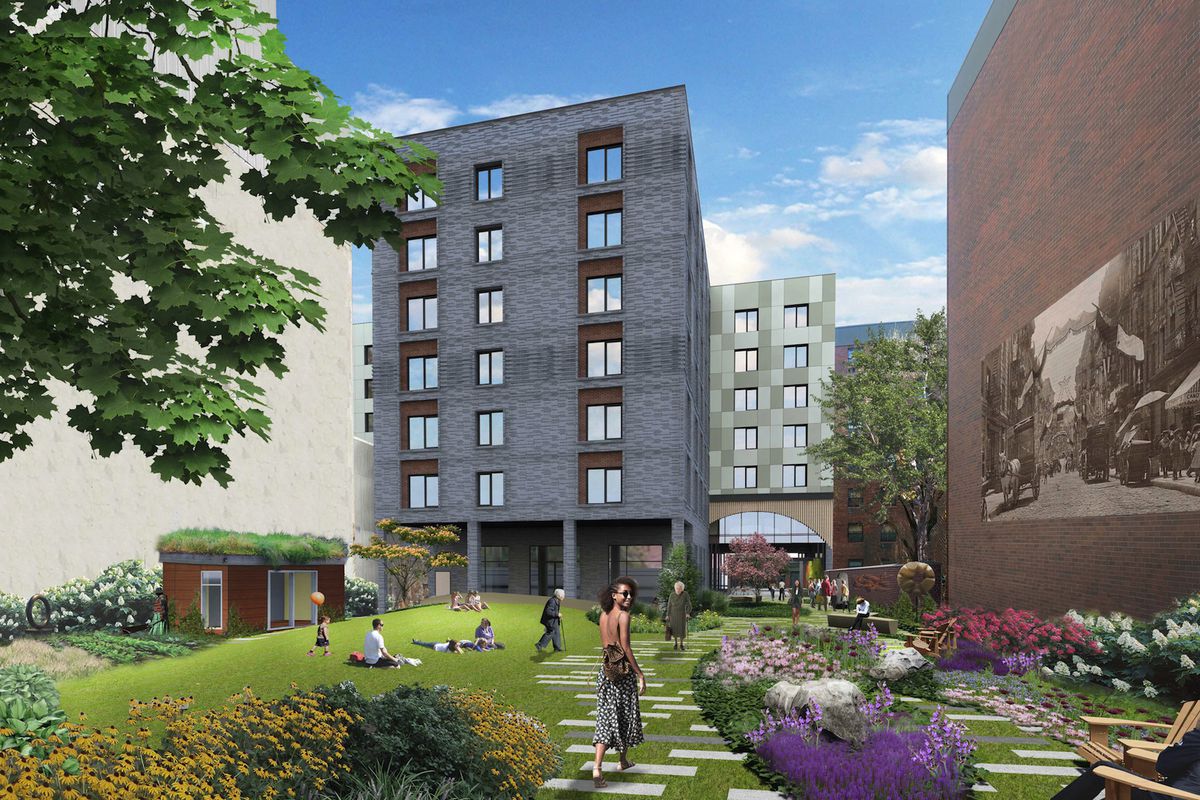 In Nolita garden fight, some see a housing opportunity; others see a false choice

On Thursday, the long-debated proposal for low-income senior housing to be built on the site of Nolita’s beloved Elizabeth Street Garden will be the subject of a City Council hearing, marking one of the final steps in the review process before a vote and mayoral stamp of approval.

As proposed, the project, known as Haven Green, would be a seven-story, 123-unit building with studio apartments for low-income seniors as well as the formerly homeless. After years of debate about the prospect of putting housing on the site, and two about the specific housing proposal—which would include 15,000 square feet of retail space, and roughly 8,000 square feet of open space, much of which would be a garden—it’s poised to be approved with the support of the local City Council member, Margaret Chin.

Haven Green meets many of the criteria elected officials say they want in developments, and is a rare opportunity to build housing geared toward low-income New Yorkers in a prime New York City neighborhood. In short, it’s the sort of development the city does not often have the opportunity to green light.

“It checks every box for getting the most public value of a development,” says Benjamin Dulchin, executive director for the Association for Neighborhood & Housing Development, citing the permanence and depth of affordability that would be offered. “You can’t bring a lot more public value out of an affordable housing deal than this.”

Worried that much of New York’s new housing is geared towards the city’s well-to-do residents? Haven Green’s units are earmarked for seniors who earn from $18,774 to $37,548 per year. It would also more than double the amount of “affordable” housing built in that particular community district during the last four years.

Think the city situates too many of its services geared to low-income New Yorkers in low-wealth parts of the city? The community district—which encompasses neighborhoods like Nolita, Greenwich Village, West Village, SoHo, and Little Italy—is about 72 percent white and is one of the wealthiest neighborhoods in New York City. The city has permitted the construction of just 93 below-market-rate units in this district in four locations: 68 Charlton Street, 102 Charlton Street, 100 Barrow Street, and 261 Hudson Street.

More in-the-weeds critiques of the city’s affordable housing plan are also addressed. Comptroller Scott Stringer, for example, has lambasted the de Blasio administration for “dragging its feet” on use of city-owned vacant lots for affordable housing. Haven Green would rise on land that was, until somewhat recently, vacant. But in 2017, Stringer signed on to a joint statement urging the city not to build on the garden site.

Haven Green’s opponents, which include the local community board and some elected officials, believe that the Elizabeth Street Garden is a vital community resource that must be preserved. Manhattan elected officials like State Senator Brian Kavanagh, Reps. Nydia Velazquez and Jerry Nadler, and State Senator Brad Hoylman have proclaimed their opposition to Haven Green, along with Council member Rafael Espinal of Brooklyn, who plans to hold a rally to save the Elizabeth Street Garden before Thursday’s hearing.

Christopher Marte, an activist and state committee member who nearly defeated Chin in the 2017 District 1 Democratic primary race, says that those fighting the development are not opposed to affordable housing; instead, Marte lamented that the city was “pitting communities” against each other by proposing to build on the garden site rather than a different vacant lot. (He cited 388 Hudson Street—located about a mile from the garden—as a site he and others prefer for an affordable housing development.)

“It was the lack of engagement and participation from the community about what they wanted,” he explains.

“[We] will be working to make sure everyone understands how much Elizabeth Street Garden benefits our community and how we can achieve more affordable housing by using the alternative site [388 Hudson Street] without destroying what has grown to be an iconic NYC place,” says Joseph Reiver, Elizabeth Street Garden’s executive director. “Low-income housing and community green space should never come at the expense of one another.”

Reiver and other garden supporters have taken the step of filing a lawsuit against HPD, challenging the city’s plan to build on the garden site. The garden has as of mid-April raised more than $100,000 for its legal defense, according to Reiver.

“HPD did not do what the law requires them to do to go forward with this project,” Norman Siegel, an attorney with the Elizabeth Street Garden’s legal team, told Curbed when the suit was filed. “The city is pitting New Yorkers against New Yorkers by pitting open green space against affordable housing and we need to resist that and say we must have both.”

But the housing-versus-garden debate in a built-up and expensive part of the city, Haven Green’s backers say, is not a false choice.

“In a neighborhood that has so few undeveloped parcels, every piece of vacant land has the potential to meet multiple, and at times competing, neighborhood needs,” said Marisa Lago, chair of the City Planning Commission, before giving a thumbs up to the redevelopment during a recent hearing. “In a neighborhood with an area median income as high as this one, the search for land on which to construct affordable housing is especially challenging.”

And Chin countered that the city needs to take advantage of every opportunity it can to alleviate the dearth of city-subsidized housing.

“We will need more affordable projects, not fewer,” she said in a statement. “Fair and equitable housing calls for all community districts, and all neighborhoods, to participate in alleviating this crisis.”

This dynamic—a politically connected cohort with time and money to spare attempting to block affordable housing—has played a part in fostering segregation and affordable housing shortages in high-demands cities like New York, according to attorney and activist Randy Shaw, author of Generation Priced Out, which features the battle over the lower Manhattan garden.

“Usually, you don’t even have the attempt to get affordable housing in a neighborhood like Nolita,” Shaw says. “Look at Margaret Chin, she almost lost her re-election over it.”

And this particular complex would benefit a population in the area that’s not currently being served by the housing market. Moses Gates, vice president for Housing and Neighborhood Planning at the Regional Plan Association, notes that there are many walk-up and tenement buildings in the neighborhood and elderly people for whom it’d be more ideal to live in a more senior-friendly one with an elevator. What has been built and in the pipeline is not affordable to that populace.

“The high end is now getting served a lot more than the middle or lower end of the market, which are traditionally what the Lower East Side was,” Gates explains. “It doesn’t take a mathematician to figure out the effects on housing that result from that.”

The affordable housing shortage is not a phenomenon confined to one particular corner of Manhattan, and Haven Green would be just a small piece of the puzzle in ameliorating the problem. But the fact that even this relatively inoffensive proposal has faced such opposition from numerous elected officials, raises the question of whether or not the city’s governance structure, elected officials, and politically active New Yorkers are up to the task of digging the city out of this ditch.

Valerio Orselli, a founding member of the Cooper Square Community Land Trust, who decades ago lived adjacent to the garden, said the low-income senior housing can also do a small part to counterbalance the trend of the neighborhood being hospitable to only the wealthy.

“What gets my goat is that I used to live for about six or seven years on Mott Street, across the street from where the housing is supposed to be built, and it was basically a very low-income neighborhood,” he says. “I have nothing against gardens, but the reality is you have people in need of a place to live.”