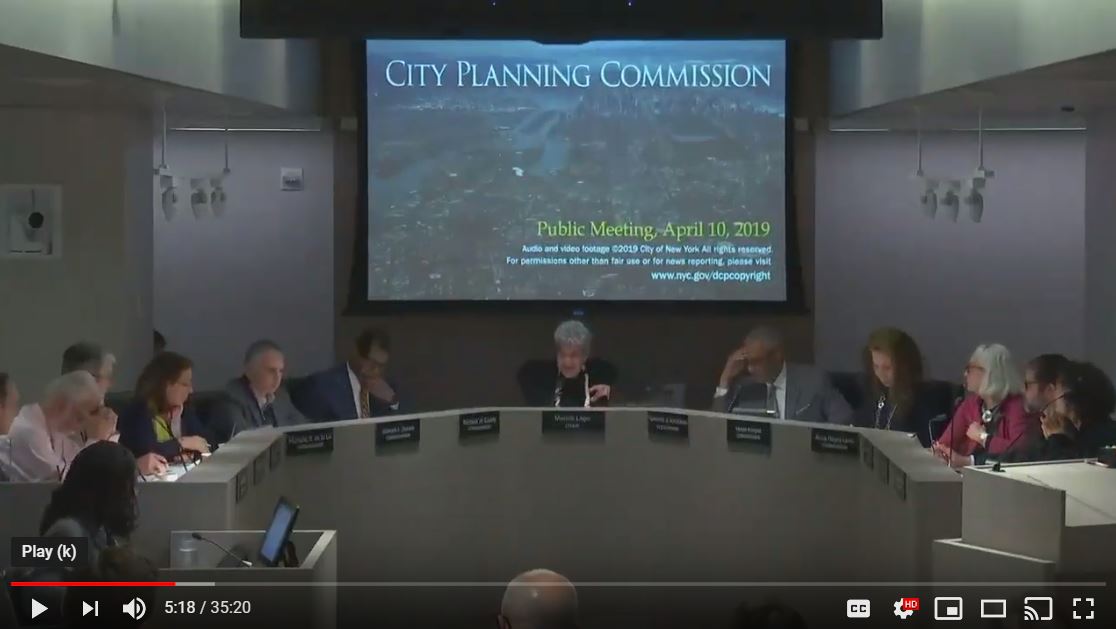 “Before I cast my vote on this I want to note that while plot of land that is before us is small, the matter before us is actually quite multi-faceted and complex. In a neighborhood that has so few undeveloped parcels, every piece of vacant land has the potential to meet multiple and at times competing neighborhood needs. And in a neighborhood with an area median income as high as this one, the search for land on which to construct affordable housing is especially challenging. I want to acknowledge and thank the many members of the public who testified at our public hearing. Whatever their position on the application, their love for their neighborhood and their city was evident. It is a sentiment that I know is shared by the members of the commission. I also want to thank HPD and the partners that it has selected, including the nonprofits Riseboro and Habitat for Humanity, for having developed a 100% affordable senior housing project and especially one that has a special focus on vulnerable members of the LGBTQ+ community. I am especially pleased that about a third of the site is going to remain as publicly accessible open space. I urge HPD and the development team to work closely with the neighboring community in programming this publicly accessible open space to meet the needs of the current neighbors and also the future residents of Haven Green. And I also urge HPD and the development team in the strongest terms possible to extend the hours of opening beyond the 9 to 5 that they had presented. Even on an early spring day like today its evident that those hours are far too short and we expect to see longer hours. And with that I vote yes.”
– Marisa Lago, Chair, City Planning Commission

“I just want to say that I was sorry to miss this hearing in person but I had a chance to see the video tape, as they say. And I do want to associate myself with the comments from the Chair. And I just want to say that it’s really important that the city take opportunities such as this to affirmatively further fair housing in communities where we’ve seen dramatic shifts racially and social economically, and with that I vote yes and I will also call on the applicants to extend the hours for the open space.”
– Michelle R. De La Uz, Commissioner