A proposed affordable housing building that would be built on a park site between Prince and Spring Streets in Little Italy has sparked a neighborhood dispute. Photo Credit: Dave Sanders for The New York Times

The Elizabeth Street Garden’s paved paths meander around a granite balustrade from the early 20th century, limestone lion statues, benches and beds of roses and daffodils.

For years, the half-acre of green grass and leafy trees, tucked in between Spring and Prince Streets in Manhattan, has been a lush backdrop for fashion shows, photo shoots, games of hopscotch and quiet afternoons.

But the city plans to sell the land soon to build a seven-story, 123-apartment elevator building for low-income seniors.

The plans have spurred a clash in the neighborhood, turning the garden in Little Italy into a quintessential New York City power struggle that pits two of the city’s scarcest resources — affordable housing and green spaces — against each other.

On Tuesday, a coalition of the garden’s supporters filed a lawsuit against the city in an attempt to halt the project.

“We need affordable housing in the community and all around the city, but it shouldn’t be coming at the expense of community green spaces, especially something unique and iconic as Elizabeth Street Garden,” said Joseph Reiver, the executive director of a volunteer-based nonprofit that manages the upkeep of the land, which the city owns but has leased to his father for decades. 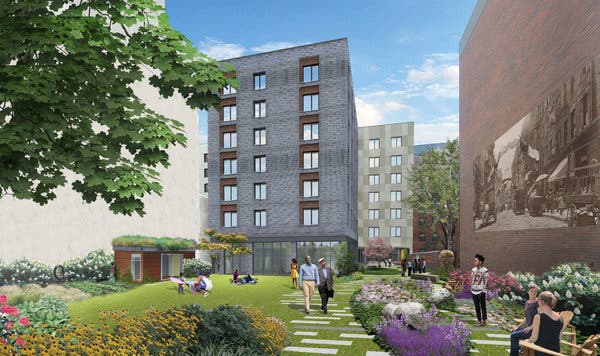 The new development would preserve about 6,600 square feet of green space, or one-third of the garden’s current size. Credit: Curtis + Ginsburg Architects

The fight is a familiar one in the city: As the amount of available land dwindles, the real estate market booms and the demand for housing increases, green spaces become easy targets for new construction.

In a city where an estimated 200,000 seniors are on the waiting list for an affordable apartment, supporters of the project see the garden as a palatable sacrifice in order to house older adults on fixed incomes who are burdened with high rents or isolated in walk-ups. Opponents say the garden is the last green space in Little Italy and SoHo, and that it’s an integral part of the neighborhood’s character, attracting more than 100,000 visitors each year.

The lawsuit is the latest salvo in a yearslong feud that has fueled petitions and raucous meetings held by Community Board 2, a group of residents who weigh in on land use issues in the neighborhood and which recently condemned the project. Councilwoman Margaret Chin, who represents the district where the garden is, supports the project, which is currently undergoing the city’s public review process.

It is expected to win the approval of the City Council — which gives great deference to the position of the local Council member — and be built by 2021, unless the lawsuit succeeds.

Ms. Chin, who chairs the Council’s committee on aging, said that about 5,000 seniors are on the waiting list for affordable units in her district, which also includes Chinatown, TriBeCa, the Financial District and parts of the Lower East Side. 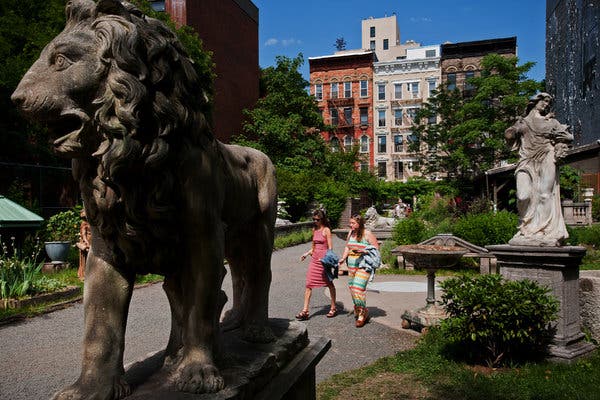 The garden is dotted with sculptured fountains, stone urns and limestone statues of lions. Credit: Aaron Zebrook for The New York Times

Half of the units at the development, named Haven Green, will be reserved for seniors who live in the area and 37 apartments will be allotted to homeless seniors. Pennrose, one of the developers, will also lease four retail spaces and RiseBoro Community Partnership will offer support services for tenants and neighbors.

“It’s easy to oppose change and the loss of something, but if we could put 123 very low income and currently homeless seniors in front of you now, I think they would tell you a very different story,” said Karen Haycox, the chief executive officer of Habitat for Humanity New York City, which will be headquartered on the ground floor and cellar of the development. “We feel a very strong passion to speak on their behalf.”

The development would preserve around 6,600 square feet of outdoor green space — about one-third of the garden’s current size — which the developers say will be open to the public.

But opponents of the project said that’s not enough.

They argue that the garden’s educational, artistic and eco-gardening programs make it a cultural cornerstone of the community. They have proposed building the development on a city-owned gravel lot about a mile away on 388 Hudson Street that could fit five times as many units, as well as more open space.

Matthew Creegan, a spokesman for the Department of Housing Preservation and Development, said the city is exploring building affordable housing there, too, in addition to the proposed development on Elizabeth Street.

Emily Hellstrom, a board member of Friends of Elizabeth Street Garden, a community group that supports designating the garden as parkland, said her group is filing a separate lawsuit against the city this week. 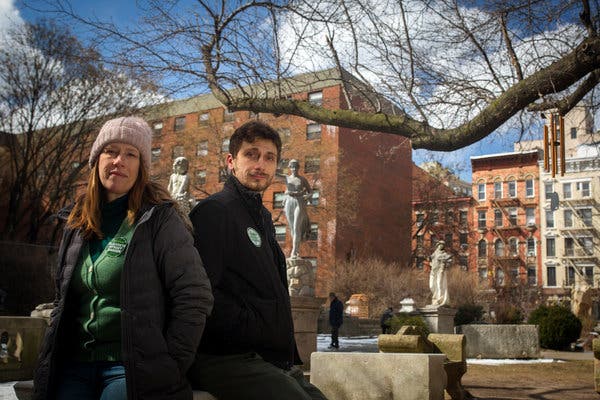 Emily Hellstrom and Joseph Reiver have marshaled support among neighbors and elected officials to save the green space. Both of their nonprofit groups filed lawsuits this week. Credit: Dave Sanders for The New York Times

“The mayor when he was elected said he would listen to grass-roots communities,” said Ms. Hellstrom. “People here want to have faith that their institutions are listening to them.”

Elizabeth Street Garden became regularly accessible to the public about six years ago, around the same time the development plans for the site became known. It was previously the site of a public school that was demolished in the 1970s, which sparked a contentious debate over what to build on the vacant lot.

In 1981, a 151-unit building of federally-subsidized apartments was built on one end of the parcel. But the remaining 20,000-square-foot lot languished for a decade until the city leased it for $4,000 a month to Joseph Reiver’s father, Allan Reiver, the owner of an adjacent gallery. He transformed it into a garden and outdoor showroom for architectural garden ornaments.

Cherry and Bradford pear trees were planted, the grass was manicured and the whole space was dotted with marble columns and sculpture fountains, giving it a Narnia-esque feel. The garden was fenced off, but open to visitors at the gallery’s discretion.

In 2012, Ms. Chin, while negotiating the neighboring Essex Crossing development, obtained a commitment from the Bloomberg administration to build senior housing on the garden site. The city would sell the land for $1 to the developers in exchange for the affordable housing.

About a year later, a group of neighbors mobilized to save the green space and worked with Mr. Reiver to open the garden to the public seven days a week, organizing volunteers to supervise the front gates. 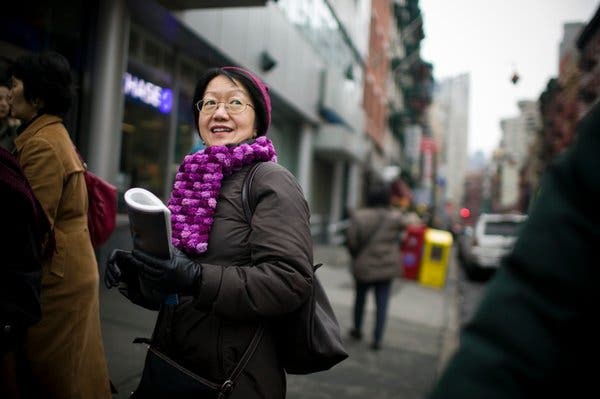 Councilwoman Margaret Chin has been a steadfast supporter of the development. Credit: Piotr Redlinski for The New York Times

It soon became an escape for tourists and neighbors alike, and a venue for art exhibitions, live music, yoga classes and gardening plots. Supporters have garnered thousands of signatures and raised money to hire Norman Siegel, a well-known civil rights attorney and former executive director of the New York Civil Liberties Union, to represent them.

The lawsuit filed on Tuesday alleges, in part, that the city failed to adequately consider the environmental impact of the garden’s possible disappearance. The lawsuit further points out that the city seeks to apply a state law intended to facilitate improving “slums or blighted areas,” which would make tax incentives available to the developers.

“How can you argue this garden is a slum?” Mr. Siegel said. “This issue is not just about Community Board 2 and Elizabeth Street Garden. If they can take your space away in Little Italy, they can take it away in your neighborhood, too.”

Critics argue there are other green spaces just two blocks away from the garden, like the Liz Christy Community Garden and the expansive Sara D. Roosevelt Park. And the well-funded campaign to save the garden, by residents of a predominantly white and gentrified neighborhood, has been portrayed by some as a classic case of the not-in-my-backyard, or Nimby, attitude.

“We are in a crisis of housing and I don’t think that the desires of a small group of collectively well-off people, some of whom own homes, can really determine the future for a desperate need here,” said Kathleen Webster, 65, a community gardener and Little Italy resident. “Everyone keeps saying build it on Hudson Street.”

Since 2014, only 93 units of affordable housing have been built in Community Board 2, which also includes Greenwich Village and the West Village.

Joseph Reiver, who has ambitious plans to build a greenhouse and community compost in the garden, denied that characterization.

“We shouldn’t be pitting senior affordable housing against community green spaces,” he said. “We don’t have to divide the community.”